An ancient, two-sided amulet uncovered in Cyprus contains a 59-letter inscription that reads the same backwards as it does forwards. 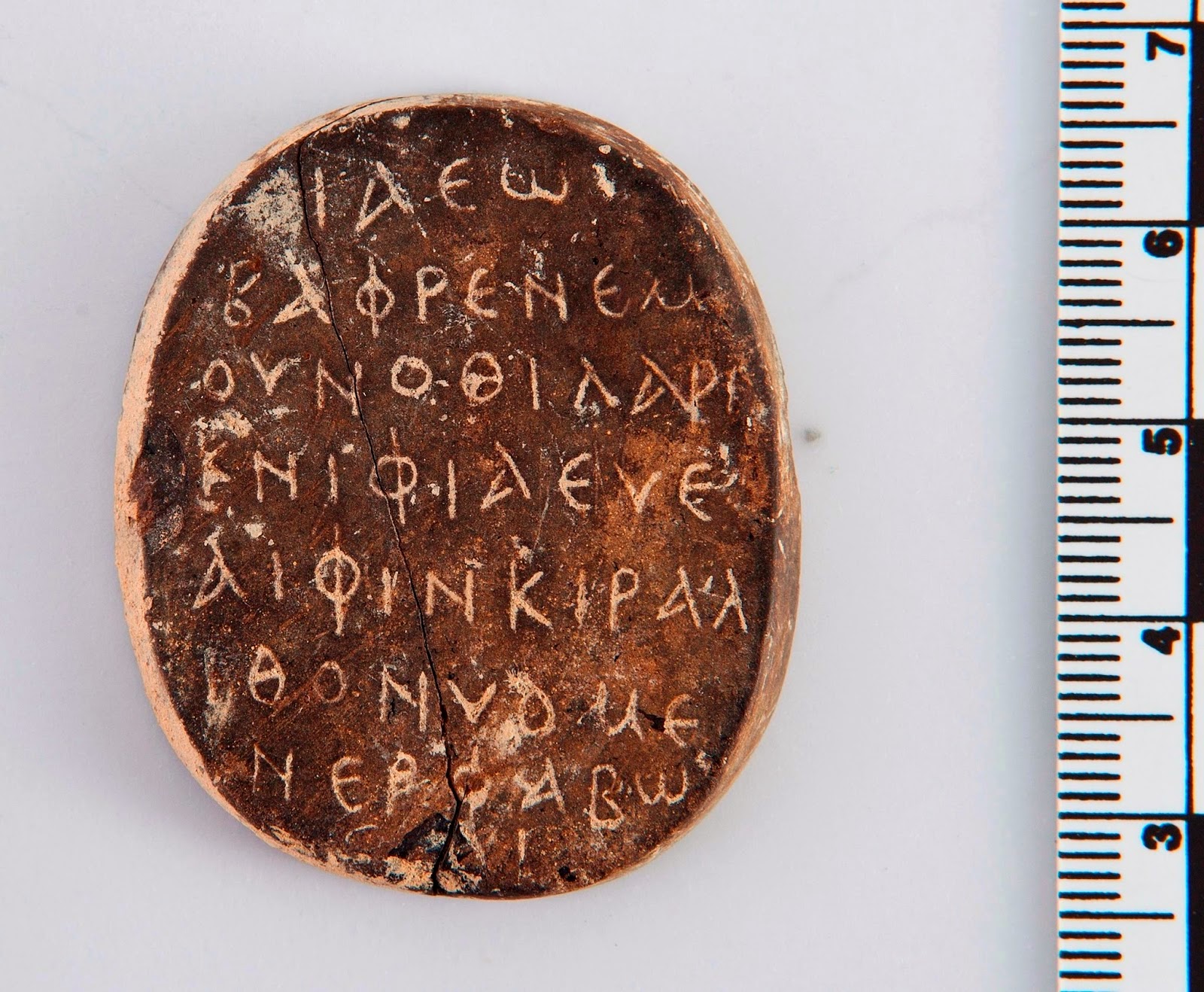 The amulet contains a Greek inscription, 59 letters long, which reads the same  backwards as it does forwards, a feature known as a palindrome. The three letters  at the very bottom, ΕΑΙ, were squeezed in and are hard to read. The amulet is  about 1.4 inches by 1.6 inches (34.9 millimeters by 41.2 millimeters) in size. The inscription translates as “Iahweh is the bearer of the secret name, the lion  of Re secure in his shrine.” Although the translation doesn’t read as a palindrome,  the original ancient Greek text does
[Credit: Marcin Iwan/Jagiellonian  University, Krakow/ Paphos Agora]


Archaeologists discovered the amulet, which is roughly 1,500 years old, at the ancient city of Nea Paphos in southwest Cyprus.
One side of the amulet has several images, including a bandaged mummy (likely representing the Egyptian god Osiris) lying on a boat and an image of Harpocrates, the god of silence, who is shown sitting on a stool while holding his right hand up to his lips.
Strangely, the amulet also displays a mythical dog-headed creature called a cynocephalus, which is shown holding a paw up to its lips, as if mimicking Harpocrates' gesture.
On the other side of the amulet is an inscription, written in Greek, that reads the same backwards as it does forwards, making it a palindrome.
It reads:

This translates to "Iahweh(a god) is the bearer of the secret name, the lion of Re secure in his shrine."
Researchers have found similar palindromes elsewhere in the ancient world writes Joachim Śliwa, a professor at the Institute of Archaeology at Jagiellonian University in Kraków, Poland, in an article recently published in the journal Studies in Ancient Art and Civilization. Śliwa notes that the scribe made two small mistakes when writing this palindrome, in two instances writing a "ρ" instead of "v."
The amulet was discovered in the summer of 2011 by archaeologists with the Paphos Agora Project.
Led by Jagiellonian University professor Ewdoksia Papuci-Wladyka, this team is excavating an ancient agora at Nea Paphos, and uncovered this amulet during their work.
Agoras served as gathering places in the ancient world.
Amulets like the one found at Nea Paphos were made to protect their owners from danger and harm, Papuci-Wladyka told Live Science in an email. 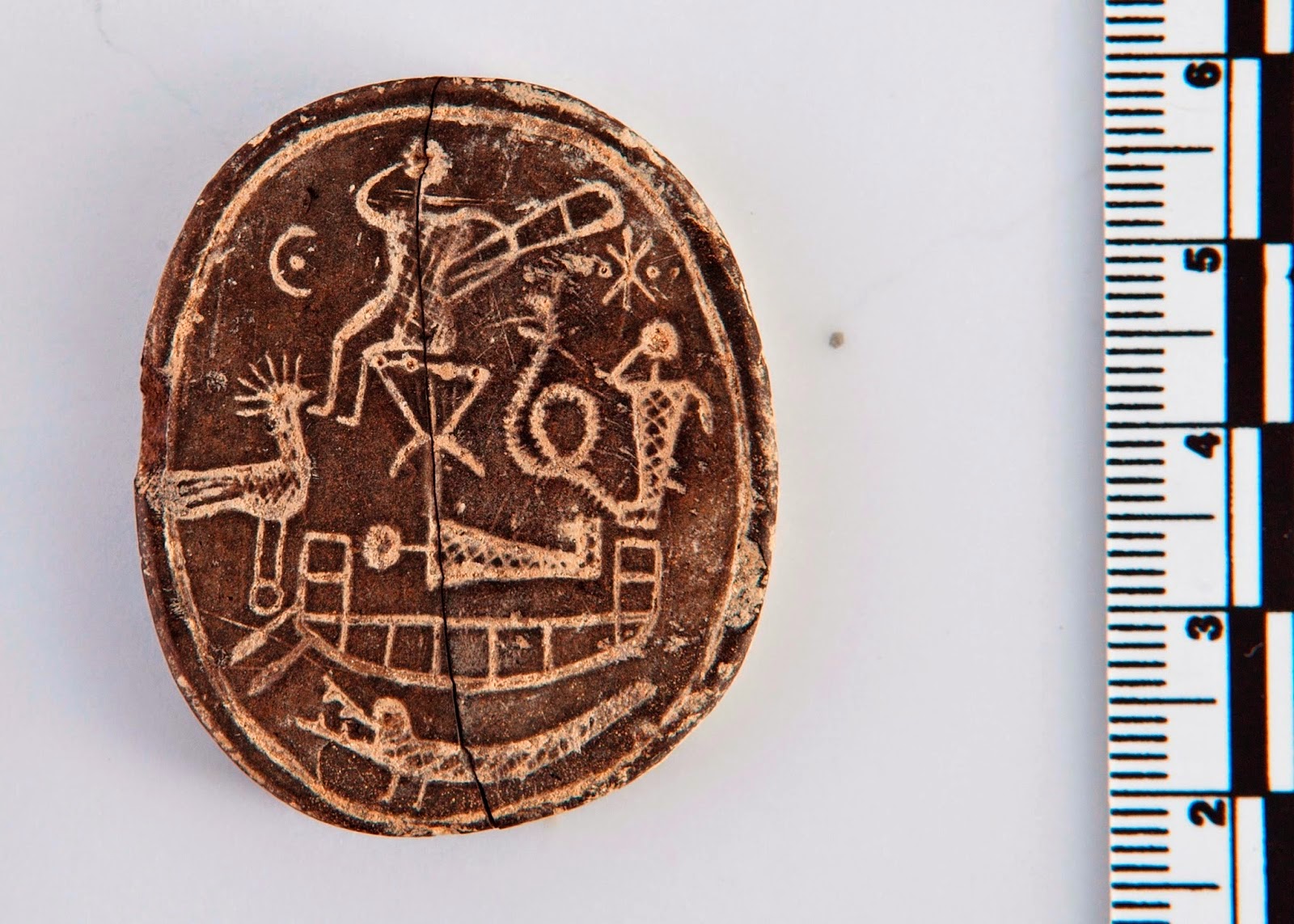 The amulet has several images.
At the bottom, there is a mummy (likely the Egyptian  god Osiris) wrapped in bandages, lying on a boat. Above the mummy, there is an  image of Harpocrates, a god of silence, shown sitting on a stool. Harpocrates’ right  hand is raised up to his lips and there is a scepter in his left hand. To the right  of Harpocrates there is a dog-headed creature called a cynocephalus that has  a paw beside its lips, mimicking Harpocrates gesture.
There is a snake between  the cynocephalus and Harpocrates, the snake’s head facing Harpocrates. There  are also depictions of a crocodile, bird (likely a rooster), half moon and a star
[Credit: Marcin Iwan/Jagiellonian University, Krakow/ Paphos Agora]


By the 5th century, Christianity was the official religion of the Eastern Roman Empire, and as time went on, traditional polytheistic (also called pagan) practices came under tighter restrictions and bans.
Nevertheless, some people continued to practice the old beliefs, worshipping the traditional gods.
This amulet adds to evidence that people practiced traditional, polytheistic beliefs on Cyprus for an extended time, Papuci-Wladyka said.
She notes that a structure called the Villa of Theseus has a mosaic with pagan elements that was likely repaired as late as the 7th century A.D.
It "rather seems that Christian and pagan religions coexisted in Paphos in times of [the] amulet being in use," Papuci-Wladyka told Live Science in an email.
Strange iconography Despite that coexistence, the amulet has several unusual features that suggest its creator didn't fully understand the mythological characters depicted. "It must be stated that the depiction is fairly unskilled and schematic. It is iconographically based on Egyptian sources, but these sources were not fully understood by the creator of the amulet," Śliwa wrote in the journal article.
For instance, rather than sitting on a stool, Harpocrates should be sitting on a lotus flower, with legs drawn up, Śliwa said.
Additionally, the dog-headed cynocephalus should not be mimicking Harpocrates. In "the classic version, the cynocephalus faces Harpocrates with paws raised in adoration," Śliwa wrote.
"We can find no justification for the cynocephalus's gesture of raising its right paw to its lips in a manner similar to Harpocrates."
Even stranger is the fact that Harpocrates and the cynocephalus have crisscrossing lines on their bodies, which suggest the ancient artist thought these figures should be mummified along with Osiris.
While the cynocephalus can be shown with mummy bandages, Harpocrates is not supposed to have them.
Mummy bandages have "no justification in the case of Harpocrates," Śliwa wrote.